Instead of digging through several feet of hard concrete for conventional plumbing, the owners of the legendary Wurlitzer building relied on the powerful Sanicubic 2 duplex grinder system from SFA Saniflo to handle a demanding plumbing-renovation challenge easily and cost-effectively. 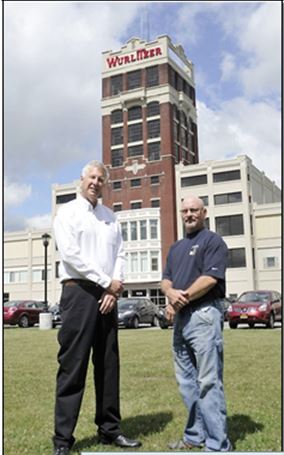 Following the 1908 acquisition, Wurlitzer moved one of its three busy manufacturing facilities into deKleist’s old

building in North Tonawanda and immediately began enlarging operations. With expansion and the addition of a giant WURLITZER

sign, the building became the company’s main manufacturing plant and a beloved symbol of local

enterprise. Until it closed in 1975, the building manufactured varied musical instruments, including the “Mighty Wurlitzer Theater Organ,” as well as phonographs, jukeboxes and keyboards. 2
The structure was expanded several times in the early 1900s, eventually encompassing an area of roughly 750,000 square feet, including a three-story building and a single-story facility. “In its heyday, 3,000 people worked there,” says current owner Tom Austen, who lives in Tonawanda and has owned part of the building with his wife since 1992.
By the mid-1970s, however, the venerable Wurlitzer building “was on the docket to get demolished,” says Austen, who recently recalled for The Tonawanda News that “no one was in it for a couple of years, and water was coming through the roof. It was desolate and he saved it.”
It was then that a local businessman, plumbing wholesaler Bill Irr Sr. stepped in to plead its case.
“At that time, Bill went to the city, insisting that it made no sense to tear the building down, because it’s an iconic landmark in this area and has such historical signifcance,” says Austen. “Bill is the one who kept the place from being demolished.”
Irr subsequently purchased the Wurlitzer facility with two others and moved his company — a distributor of plumbing, HVAC, refrigeration and electrical products — into part of the building. In fact, Irr Supply is still using it as its main distribution center today, according to Austen. The company is celebrating its 150th anniversary this year, serving a trading area of upstate New York and northern Pennsylvania.
“Bill eventually bought out the other two owners and then sold the three-story part of the complex to my wife and me,” says Austen. Irr Supply remains his tenant in the three-story building, with a plumbing showroom and training center. Meanwhile, Irr still owns the majority of the single-story building.

Today, Austen’s property management company, Wurlitzer Industrial Park, Inc., is based in the multi-story building, which still carries the eponymous sign at its top. Counting employees and tenants, some 400 people use the buildings.

Two years ago, Austen learned that Walmart would be constructing a new facility on a nearby lot. Austen quickly realized that his building would be severely impacted by this massive project. He needed to take action prior to construction in order to prepare for disruption of water and sewer lines.
“The new building was to be a major construction project situated very close to our complex,” he explains. “The retailer would be creating parking lots and moving sewer and water lines. That meant we had to abandon our own sewer line and come up with an effective alternative.”
Wurlitzer building facilities manager Mark Berube began the research. “The bathrooms for both buildings are all connected, and tied together in the basement of the one-story building,” Berube explains. “In order to abandon that sanitary line and put in new, ordinary plumbing for both buildings, we would have had to make foor cuts through the concrete. But our building cement is so solid, it is really a chore to get out. I started doing the cost estimate for new plumbing and stopped at $25,000.”
Austen agreed with Berube that such an expense wasn’t justifed. Additionally, they were concerned about the impact a conventional plumbing renovation would have on their tenant.
“Irr Supply’s shipping dock doors are right where we would have had to cut across and into the cement,” Berube explains. “They would have had to shut down their docks and work people at all kinds of weird hours. I don’t know how they would have shipped stuff out.”

It’s always complicated and challenging to bust through concrete, but — as Berube has already mentioned — the Wurlitzer building had a greater challenge than usual.
“The cement under our building is one of the hardest in the country,” Austen says. “In the early 1900s, when they were adding on to this complex, they used rock from the river across the street to form the aggregate. A few years ago, we had some work done by a contractor who cut into the cement, and he showed us a special map that indicated just how hard our cement is.”

Irr Delivers Better Solution
Clearly, conventional plumbing would be diffcult, time-consuming and very costly, and Austen’s tenant, Irr Supply, would have suffered expensive disruption of business if they’d gone that route. So Berube set about fnding a better solution. “I fgured, Why not ask Don Smith at Irr Supply?” he says.
“When Tom and Mark advised me of their project, the frst thought was to design the project around a traditional duplex sewage system with basin, pumps and alarms,” says Smith, who serves as vice president of purchasing at Irr. “But the cost of the labor to install was overwhelming.”
So Smith helped Berube come up with a smarter plan that was better for both tenant and owner. In fact, Smith was not only able to recommend the right product for this challenge; he was also able to supply it. A distributor

for SFA Sanifo, Irr Supply specifed a Sanicubic 2 heavy-duty, duplex grinder pump.
Well-suited for both residential and commercial applications, the Sanicubic 2 contains a pair of one-horsepower motors that make it a breeze to handle sewage and wastewater from several fxtures. The units, which pump up to 50 gpm (gallons per minute), are designed to operate individually and alternately, so neither gets overused. That was an especially important feature for Berube, who needed to ensure the new plumbing system – which handles 11 toilets, six urinals and six sinks – would remain operable even if one unit went out.
“I really would not have felt comfortable with just a one-pump system,” says Berube, explaining the choice of the Sanicubic 2. “I told Don that we needed something that is going to take care of all our needs, with a backup in case something went wrong.”
Because it sits right on the foor, the preassembled Sanicubic 2 eliminates time-consuming, costly busting through concrete, as is required with conventional plumbing. To maximize longevity while

minimizing maintenance, the Sanicubic 2 houses comparatively few components: the duplex pumps, stainless steel cutting blades, two pressure switches and a circuit board assembly that starts and stops the unit. A common spindle shaft operates the impellers and the cutting blades.
“Kudos to Don Smith,” Austen says. “He educated us on what would be the best product for the project. It was his idea to go with the Sanicubic, and he saved us a lot of time, effort and money.”

Fully Operational in Just One Day
In February 2012, RIC Plumbing of Lockport, N.Y., installed the Sanicubic 2 in the basement of the one-story section of the Wurlitzer building. Mechanic Scott Kuhns handled the installation in just one day.
“This was my frst install of a Sanicubic,” he says. “It went well, and this pump is well-suited for the application. The building is very old and digging would have been very diffcult.”
Counting materials and labor, including the Sanicubic 2, Austen estimates the total cost installed was around $6,500. “It was so much more affordable than our original projection of $25,000-plus,” Austen says. “Plus, Irr Supply wasn’t disrupted, either: In one day, they were back in business.”
After a couple of years of operation, Berube and Austen remain enthusiastic about going with the Sanicubic 2. “I think we had to hit the reset button only once or twice — that was pretty much it,” says Berube. “We haven’t done any maintenance. It’s been a working champ and has ft our application just perfect.”
Whether for new construction or renovation of a stately historic building such as the Wurlitzer, the Sanicubic 2 is a sensible solution that provides modern, reliable plumbing technology without the expense, the hassles and the delays of digging through concrete.

SFA SANIFLO U.S.A. — whose parent company originated macerating plumbing technology — offers a complete line of up fush toilets and gray water pumping systems for residential and commercial applications. Sanifo developed its innovative, “above-foor plumbing” technology more than a half-century ago and has led its commercialization worldwide. Today, the company markets macerating technology through 22 subsidiaries in 50 countries and has sold more than six million units worldwide since 1958.

Sanifo markets through independent sales agents throughout North America, and the product line is currently available at distributor and dealer locations throughout the United States and Canada. For more information, contact Sanifo at 1(800) 571-8191. Or visit the Sanifo website at www.sanifo.com. For editorial assistance, including photography, contact John O’Reilly c/o O’Reilly-DePalma: (815) 469-9100 or john.oreilly@oreilly-depalma.com. To download images (hi-res .tif fles) to accompany this article, use this link: http://sanifo.oreilly-depalma.com/2014/cs-wurlitzer-building.shtml.

Thanks for subscribing! Please check your email for further instructions.

Something went wrong. Please check your entries and try again.
Scroll To Top